Where is the Dawn Spacecraft right now?

The app above shows the position of the Dawn Spacecraft right now. You can also wind the animation backwards in time to watch its launch and its flyby of Mars and its 15 month visit to the asteroid Vesta.

For browsers that don't support flash, we provide a video animation of the complete flightpath.

For an in-depth report on Dawn and its mission at Ceres, and the quest to find out what the bright spots are visit the JPL Site.

Dawn has been in orbit around Ceres since March 6 2015. In Octboer 2018, it ran out of fuel and is now tumbling gently as it orbits Ceres, as it will for many years, with no power to keep its computers and instruments alive.

Dawn missed scheduled communications sessions with NASA's Deep Space Network on Wednesday, Oct. 31, and Thursday, Nov. 1. After the flight team eliminated other possible causes for the missed communications, mission managers concluded that the spacecraft finally ran out of hydrazine, the fuel that enables the spacecraft to control its pointing. Dawn can no longer keep its antennas trained on Earth to communicate with mission control or turn its solar panels to the Sun to recharge.

This historic 11 year mission is now over with Dawn being the first spacecraft to orbit and investigate 2 solar system bodies (Vesta and Ceres), and the first to orbit a dwarf planet.

Dawn will now stay in orbit about Ceres for at least 20 years and most probably for more than 50 before it's orbit decays.

As NASA’s Dawn spacecraft prepares to wrap up its groundbreaking 11-year mission, which has included two successful extended missions at Ceres, it will continue to explore -- collecting images and other data.

Within a few months, Dawn is expected to run out of a key fuel, hydrazine, which feeds thrusters that control its orientation and keeps it communicating with Earth. When that happens, sometime between August and October, the spacecraft will stop operating, but it will remain in orbit around dwarf planet Ceres.

These days, near the end of Dawn’s second extended mission at Ceres, the spacecraft continues to wow us week after week, with very close photos shot from only 22 miles (35 kilometers) above the dwarf planet -- about three times the altitude of a passenger jet.

Here are some close up images of the bright spots (Faculae) in Occator Crater.

This very interesting and informative lecture on the Dawn mission with plenty of humour. It's long so you might want to dip into various sections - (timings approximate): 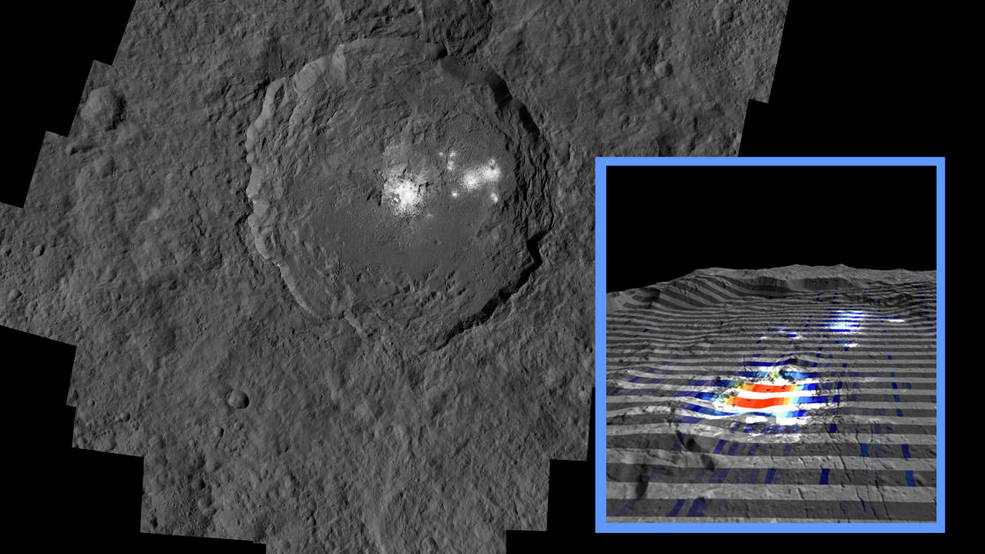 The brightest area on Ceres, located in the mysterious Occator Crater, has the highest concentration of carbonate minerals ever seen outside Earth, according to a new study from scientists on NASA's Dawn mission. This result seems to indicate that there has been recent hydrothermal activity in the presence of water. Article

On June 30, just in time for the global celebration known as Asteroid Day, NASA's Dawn spacecraft completes its primary mission. The mission exceeded all expectations originally set for its exploration of protoplanet Vesta and dwarf planet Ceres. The historic mission is the first to orbit two extraterrestrial solar system targets, and the first to orbit any object in the main asteroid belt, between Mars and Jupiter. Article

March 2016: Dawn is still at work around Ceres

9 Dec 2015: Dwarf planet Ceres is shown in these false-color renderings, which highlight differences in surface materials. Images from NASA’s Dawn spacecraft were used to create a movie of Ceres rotating, followed by a flyover view of Occator Crater, home of Ceres’ brightest area.

For the latest information on Ceres and Vesta, watch this NASA video from 8th October 2015:

Like most NASA videos, there's a very dull intro that you can skip if you jump to 3 minutes in.

The above image is a single frame from a video created using the data from Dawn. To see the animation, click on the image above.

The following data is from a lecture by Chris Russell on 21 July 2015 which can be seen here.

The crater with the brightest collection of "bright spots" is officially designated as Occator Crater. It would appear that a"haze" has been detected in the crater, although more work is required to confirm this, which indicates that bright spots might be due to ice that is sublimating into water vapour which fills the crater. The image above is a frame from a movie showing the crater from many angles - not yet released.

Ceres has only one mountain - nick named "The Pyramid"

Seen in a movie (which we hope will be released soon) Ceres' only detected mountain is around 5km tall, 30km wide and has a knobby flat top with bright downslope streaks. It is surprisingly similar to the mountains seen on Pluto.

The team have named many of the craters after harvest deities. These names have now been approved by the IAU.

Ceres is smaller and denser

The physical properities of Ceres has been updated by dawn. It is slightly smaller than previousuly thought and also denser by 4%. Also the north pole is pointing in a different direction than ground based measurements suggested.

For the latest on the spacecraft health see: NASA's Dawn 2015 Mission Status Page

Dawn - An introduction with commentary by the late great Leonard Nimoy

Dawn was launched on 27th September 2007 after surviving several cancellations and reinstatements. its mission is to study two very different protoplanets - Vesta a 500km diameter asteroid and Ceres a 950km diameter dwarf planet.

Dawn is also NASA's first purely exploratory mission to use ion propulsion engines. These engines use up to 10KW of electrical power from its solar panels to accelerate atoms of Xenon to very high speed (about 50km/s) in order to create a small impulse force - equivalent to the weight of a sheet of paper. Over time this small force can be used to change the speed of the craft by a significant amount. The spacecraft has just under 1000kg of Xenon which can, over time, change the speed of the craft by up to 10km/s. A "crazy" explanation of the ion drive can be seen on this video:

On its way from Vesta to Mars, the Ion drive switched off for four days due to the spacecraft entering safe mode - possibly due to radiation affecting its computers. This switch off resulted in a delay in reaching Ceres by around a month.

Dawn's flight plan included a flyby of Mars to increase its speed, and then a rendezvous with Vesta which it would study for over a year before moving on to meet up with Ceres. Dawn is the first spacecraft mission to orbit more than one extraterrestrial object. The schedule is listed below:

Dawn was the first spacecraft to visit Vesta and was able to study it intensively whilst orbiting for some 18 months. Vesta, with a 525km diameter, is the second largest object in the asteroid belt after the dwarf planet Ceres. Although roughly spherical in shape, it is not considered to be in hydrostatic equilibrium (mostly due to a large concave feature and a protruding feature on its southern side) and therefore is not recognised as being a dwarf planet.

It was discovered in 1807 and for some fifty years was classified as a planet until more and more asteroids were discovered and it became demoted to being an asteroid.

This video highlights some of the findings at Vesta:

Dawn was meant to leave Vesta in August 2012 and head on to Ceres. However due to a problem with one of its reaction wheels (used to help orient the spacecraft) its departure was delayed until September. It is now successfully orbiting Ceres and gathering a huge amount of scientific data, which you can find out about by following the links below.

The video below shows Dawn going into orbit: