Pluto and its moons LIVE 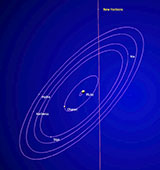 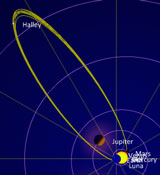 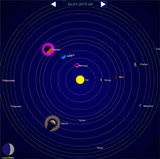 Dwarf Planets of the Solar System

This page provides a brief description of each of the dwarf planets of our solar system. 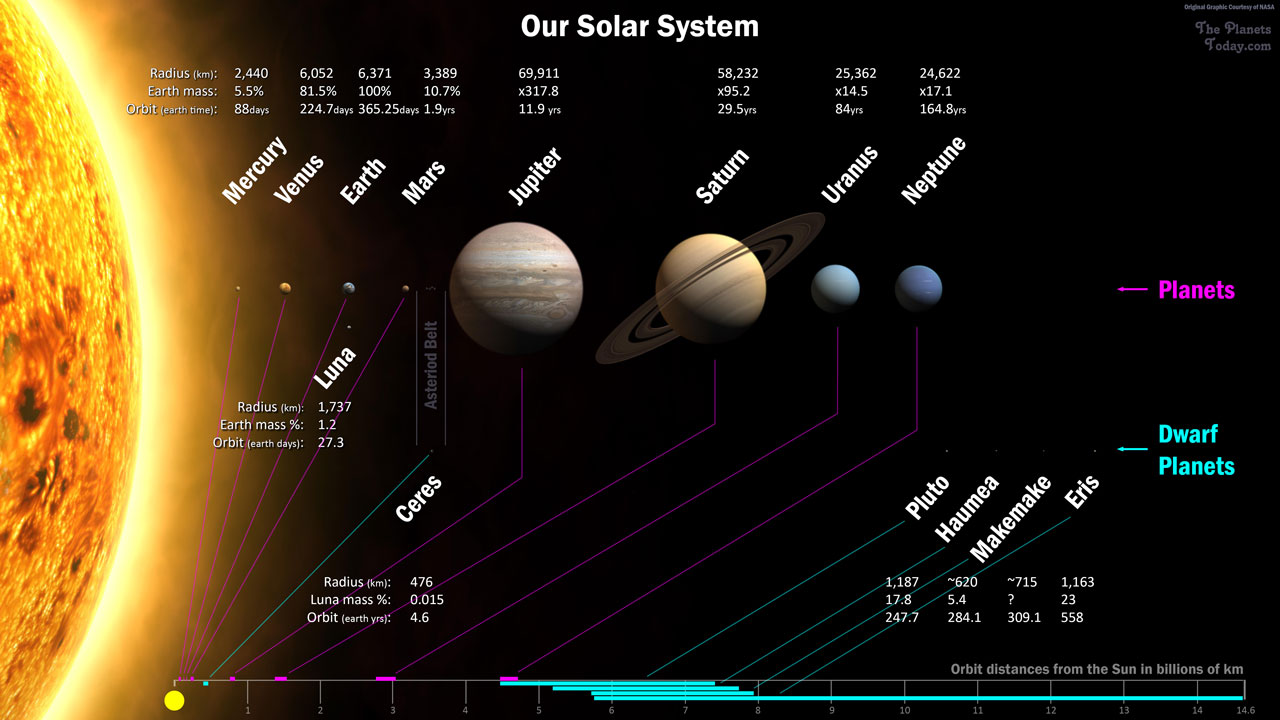 Here is a list of dwarf planets ordered in their distance from the Sun. 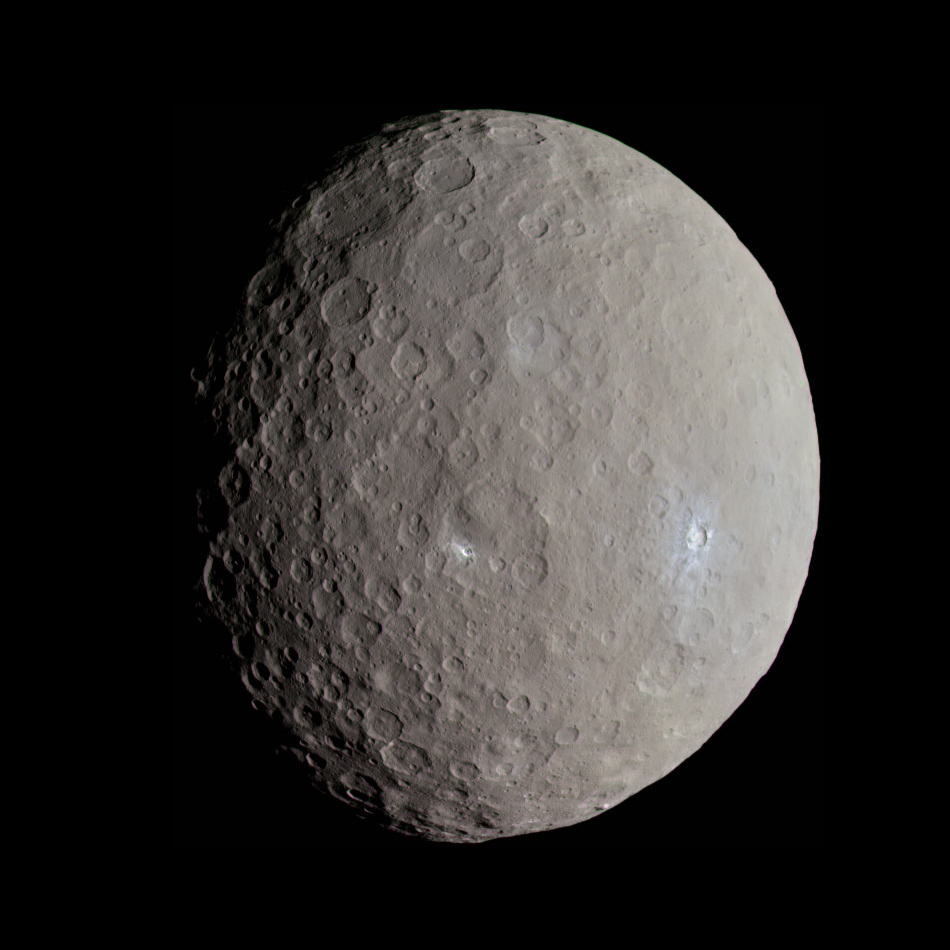 Approximate true-color image of Ceres, using the F7 ('red'), F2 ('green') and F8 ('blue') filters, projected onto a clear filter image. Images were acquired by Dawn at 04:13 UT May 4, 2015, at a distance of 13641 km. At the time, Dawn was over Ceres' northern hemisphere. The prominent, bright crater at right is Haulani. The smaller bright spot to its left is exposed on the floor of Oxo. Ejecta from these impacts appears to have exposed high albedo material similar to deposits found on the floor of Occator Crater.

The dawn spacecraft mission finally ended on 31st Octboer 2018. For a whole host of videos and information about what Dawn found at Ceres, visit our Dawn page.

9 Dec 2015: Dwarf planet Ceres is shown in these false-color renderings, which highlight differences in surface materials. Images from NASA’s Dawn spacecraft were used to create a movie of Ceres rotating, followed by a flyover view of Occator Crater, home of Ceres’ brightest area.

It is thought to have a rocky core surrounded by a 100km crust of water ice. Such a volume of ice would be more that the total volume of fresh water on the Earth. A thin atmosphere of water vapour sublimating from the ice is possible. The maximum temperature at the surface with the sun overhead is estimated to be a balmy -38 degrees C.

Its orbit is over 4.5 years long and is inclined by 10 degrees to the plane of the ecliptic. At its extremes it reaches 0.5 Au (e.g. the half the distance as the Earth is from the sun) away from the ecliptic plane.

It has no moons.

For recent information on Ceres, watch this NASA video from 8th October 2015:

Like most NASA videos, there's a very dull intro that you can skip of you jump to 3 minutes in. This video also has a lot of details about the asteroid Vesta.

Ceres was discovered by Giuseppe Piazzi at the Academy of Palermo, Sicily on 1 January 1801, which was half a century before the discovery of Neptune. It was the first object to be seen in the asteroid belt and was listed as one of the solar system planets for over 50 years. However as more and more asteroid belt objects were discovered Ceres became classed as the largest of the asteroids.

Piazzi named the planet after the goddess Ceres (Roman goddess of agriculture). As with all dwarf planets, it is invisible to the naked eye and was not known to the ancients. Click here for an interesting article on the discovery of Ceres.

Pluto and its Moons

Click for Live Display showing current positions of Pluto and its moons.

Click for Display showing a replay of New Horizons as it sped through the Plutonian System. 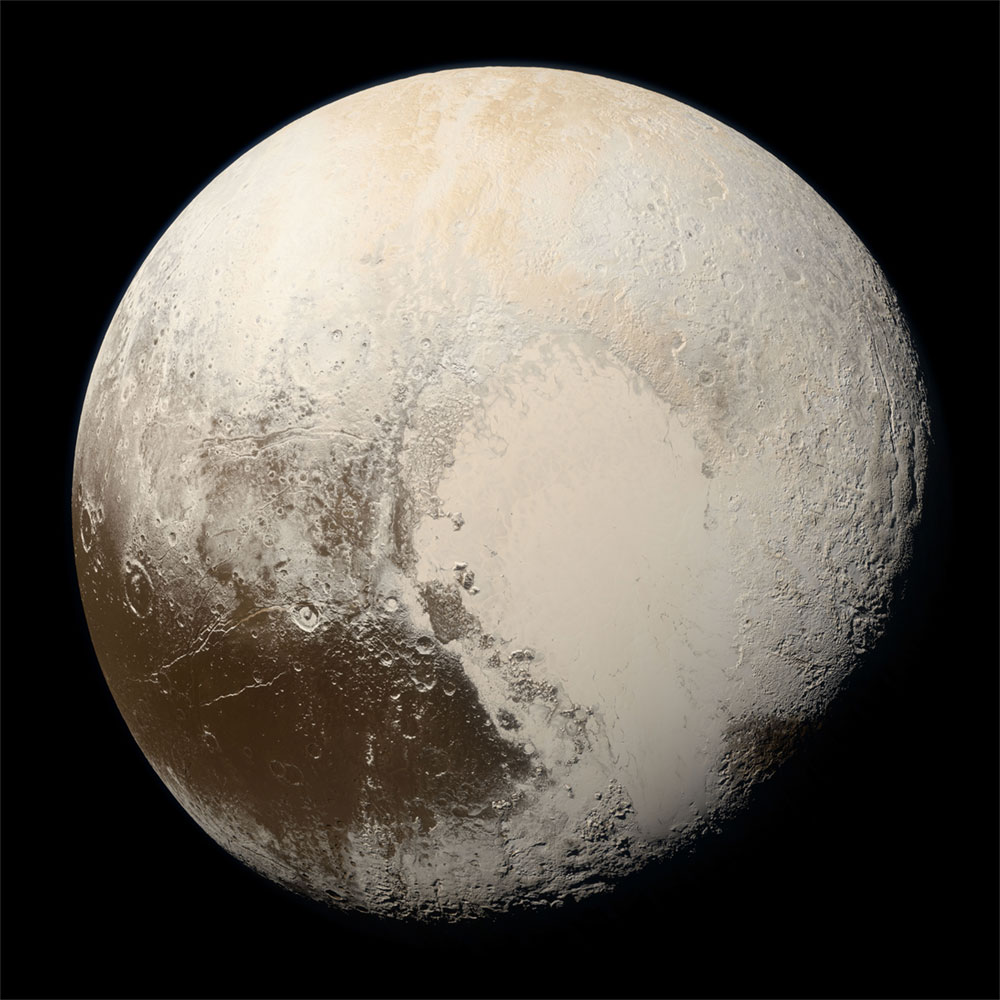 Three years after NASA's New Horizons spacecraft gave humankind our first close-up views of Pluto and its largest moon, Charon, scientists are still revealing the wonders of these incredible worlds in the outer solar system. Marking the anniversary of New Horizons' historic flight through the Pluto system on July 14, 2015, mission scientists released the highest-resolution color images of Pluto and Charon. These natural-color images result from refined calibration of data gathered by New Horizons' color Multi-spectral Visible Imaging Camera (MVIC). The processing creates images that would approximate the colors that the human eye would perceive, bringing them closer to “true color” than the images released near the encounter. This image was taken as New Horizons zipped toward Pluto and its moons on July 14, 2015, from a range of 22,025 miles (35,445) kilometers. This single color MVIC scan includes no data from other New Horizons imagers or instruments added. The striking features on Pluto are clearly visible, including the bright expanse of Pluto's icy, nitrogen-and-methane rich "heart," Sputnik Planitia.

Pluto is the second largest dwarf planet after Ceres, and is about 1/6 the mass of the Moon. It has an diameter of 2370km and is made of rock and ice with a thin atmosphere of nitrogen, methane and carbon monoxide. It has a temperature of around -230 degrees C.

Its 248 year elliptical orbit occasionally takes it inside the orbit of Neptune. However the orbit remains stable because it orbits exactly 2 times for every 3 orbits of Neptune. The orbit is also inclined by 17 degrees to the plane of the ecliptic ensuring it remains distant from Neptune.

For more information on the moons see our Plutonian System page. 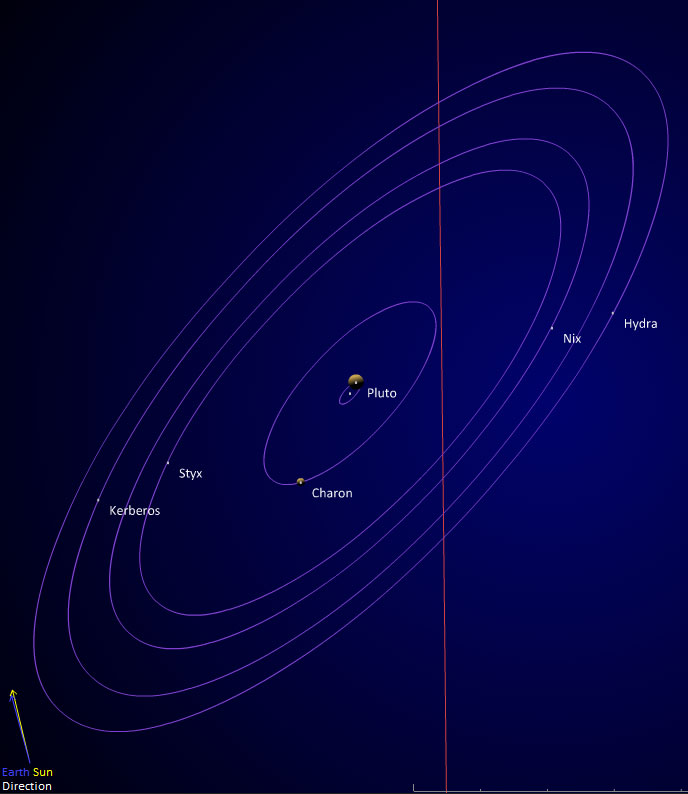 Pluto has five moons, the latest of which is Styx which was discovered in 2012 in a Hubble space telescope image. The largest Moon is Charon (1200km diameter). It is so large (12 percent the mass of Pluto) that it is forms a binary system with Pluto in which both objects orbit about each other every 6 days. The other moons orbit around both Pluto and Charon. The outer moons are quite small - between 10km to 100km diameter - and orbit with periods of (generally) less than a month.

Pluto is of course the most well known dwarf planet because of its previous classification as the outermost planet of the solar system. Rather like Ceres before it, it has suffered because of the number of similar objects now discovered in the same region mean that it can no longer be thought of as one of the major planets.

Pluto was discovered by Clyde W. Tombaugh on the 18th February 1930 after a long search for "Planet X" which was thought to exist due to perturbations in the orbit of Neptune. It was initially thought to be as large as Neptune but as better observations became possible its estimated mass was constantly reduced until , in the 1970s, it was found to weigh less that 1% that of the Earth.

The name Pluto, after the god of the underworld, was proposed by Venetia Burney, an eleven-year-old schoolgirl in Oxford, England, who was interested in classical mythology. She suggested it in a conversation with her grandfather Falconer Madan who passed the name to astronomy professor Herbert Hall Turner, who cabled it to colleagues in the United States. It was then chosen after a vote against other candidate names. Listen to Venetia here.

Pluto was visited for the first time ever by the New Horizons spacecraft which reached its closest approach on July 14, 2015. Scientific observations of Pluto began 5 months before closest approach and continued for a month after the encounter.

Haumea is one of the stranger dwarf planets in that it does not appear to be spherical. It has an extremely fast (for a planet) rotation of once every 4 hours and this has pulled it into a ellipsoidal shape - rather like a squashed rugby (or American football) ball, spinning on its side. Strange - but apparently still in hydrostatic equilibrium.

It orbits the sun once every 283 years and inhabits a similar area of space in the Kuiper Belt as Pluto. Its orbit is inclined by 28 degrees to the ecliptic meaning it spends most of its time a long way above or below the ecliptic plane. It is thought to be comprised of rock with a thin covering of crystalline ice which is as bright as snow. However the low temperature (-220 degrees C) and high radiation should mean that the crystalline ice should have turned to a red coloured amorphous ice over the last 10 million years or so meaning that Haumea's surface is possible much newer than expected.

Haumea has two moons, Hi'iaka and Namaka. These icy bodies have diameters of about 350km and 170km and orbit Haumea every 49 and 18 days respectively. Again the fact that they have crystalline ice means their surfaces are possibly relatively new.

Haumea was discovered in 2004/5 with some doubt over who actually gets the credit for it. A team at Caltech, USA and a team from the Instituto de Astrofísica de Andalucía in Spain both put in claims and which are being contested. However it seems that the Caltech team got the pleasure of naming it "Haumea" after the Hawain goddess of fertility and childbirth.

Because the team discovered Haumea on the 28th December, the team nicknamed it "Santa" and later the two moons "Rudolph" and "Blitzen". However due to IAU guidelines that classical Kuiper belt objects be named after mythological beings associated with creation, the Hawain names were chosen (with Hi'iaka and Namaka being Haumea's children) for the official names.

There have been no robotic missions to Haumea and none are currently underway.

Makemake's orbit is similar to Haumea in that it resides in the Kuiper Belt with a 29 degree inclination to the ecliptic and with a 320 year period orbit. It has a diameter of around 1430km and appears to be reddish in colour. Like Pluto it has methane and possibly large amounts of ethane and tholins at its surface, and is covered by a very thin atmosphere at -240 degrees C. It's thought to be spherical with a rotation of once every 8 hours.

Makemake has no (detected) moons which makes determining its mass difficult.

Makemake was discovered in 2005 by the same Caltech team who discovered Hameua and Eris, all of which were announced at the same time. Initially codenamed "Easter Bunny" since it was discovered near Easter, it was officially named "Makemake", the creator of humanity and god of fertility in the mythos of the Rapanui, the native people of Easter Island. This name was chosen in part to preserve the object's connection with Easter.

Just like Haumea, there have been no robotic missions to Makemake and none are currently underway.

Eris has an orbital period of 557 years and was at its furthest from Sun in 1977 at 97 AU (e.g. 97 Earth orbit radius). It will come to its closest point to the Sun at sometime around 2257 (38 AU). With an orbit at almost 45 degrees to the plane of the ecliptic it travels over 30 AU to the north and 50 AU to the south of the ecliptic. It is currently (2014) around 30 AU from the ecliptic plane on the southern side but getting closer.

Apart from long-period comets and space probes, Eris and its moon are currently the most distant known objects in the Solar System. Eris appears grey in colour and shows traces of methane in its atmosphere - rather like Pluto. The surface temperature varies between -217 and -240 degrees Celsius and its diameter, at 2400km, is thought to be similar to Pluto’s with a mass of around 1/5 that of the Moon.

A moon "Dysnomia" orbits Eris every 15 days. Because of the problems with observing such a small object at such distances many details about Dysnomia are vague. The diameter is thought to be somewhere between 150 and 650km.

Discovered by the same team as Haumea and Makemake in 2005, it was initially nicknamed "Xena" after the warrior princess TV character - and also because it began with X as in the fabled "Planet X". It was eventually named after the Greek goddess Eris, a personification of strife and discord. The moon, Dysnomia, was named after the Greek goddess of lawlessness who was Eris' daughter. Mike Brown (the team leader) says he picked it for similarity to his wife's name, Diane. The name also retains an oblique reference to Xena who was portrayed on TV by Lucy Lawless.

As you may expect... there are currently no missions planned to visit Eris.

To find out more about the planets of our solar system, see our Planets page.